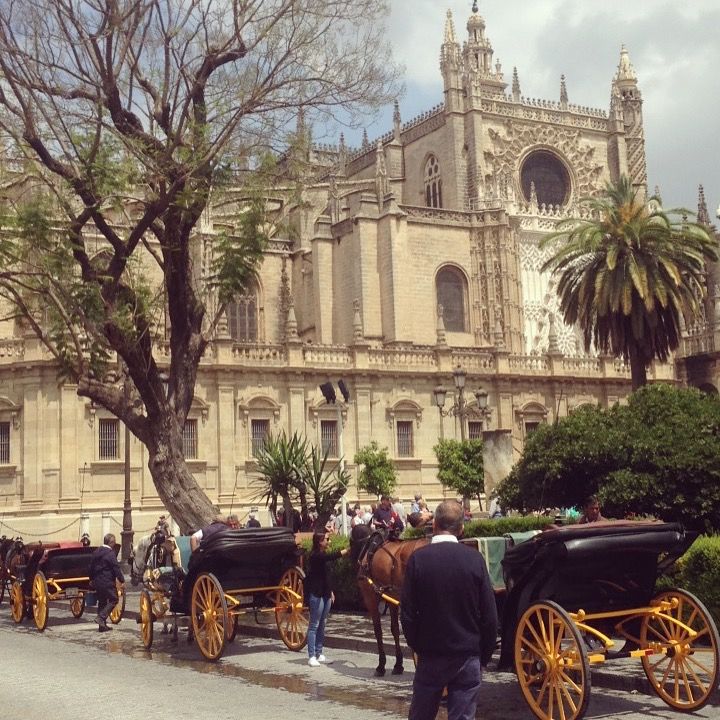 Seville- capital of Andalucía. I’ve been here three times now and each time I have had quite a different experience as it is a large city (of 700,000 inhabitants) and I’ve come to think of it as a larger version of where I live in Córdoba. Architecturally and culturally, the two cities are not actually that different from each other.

Socially, there is notably much more nightlife in Seville and much more variety of bars, restaurants and shops. Córdoba lacks in shopping but this is good for my bank balance!! However I do like to make the most of visiting Seville to find shops I’d otherwise have to order from online.

“Are the ‘Setas de Sevilla’ aesthetically attractive? That’s subjective. My personal opinion is that it is compelling to look at and gives the city a sort of dystopian look…”

Some Quick Facts About Seville:

Seville is the capital of Andalucía therefore it is obvious that it should offer so much more in terms of art, culture and leisure.

How to see Seville then, if you only have a day before moving on to a neighbouring Andalucían city or coast?

Here are some ideas to get you started, places I can vouch for myself which are definitely worth visiting if you are on limited time. I should know as I managed to see these sights once with 45 school children in tow! 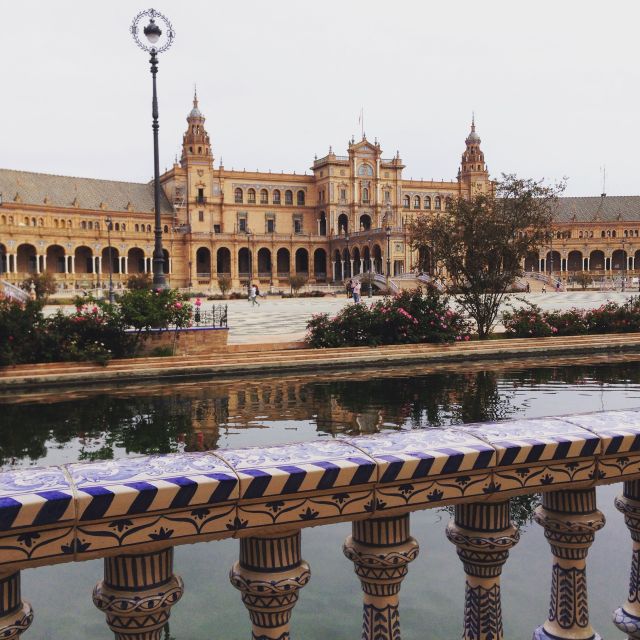 Many Spanish cities have a Plaza de España but this one is particularly well known and beloved and it is easy to see why, at just how striking it is! Built in 1929 for the Iberoamericana Exposition, it has come to be one of the emblematic images of Seville and Andalucía.

Firstly, there is the semi-circular boating lake which is framed by the ornately pillared low walls as you can see in the above photograph. This is also a good vantage point for a photo. Sometimes, you will catch swans and ducks drifting peacefully along.

There are the twin towers at the head of the plaza and the typical arches seen all over Andalucía, a modern construction nod to the Islamic architecture that can still be seen, perhaps most famously in the Mezquita of Córdoba.

When I visited the Plaza de España with my school students from Córdoba, they all flocked immediately to find the wall tile dedicated to their city. Along the arc of the main buildings, there are 49 azulejos (wall tiles) for each province in Spain.

La Giralda and the Cathedral of Seville 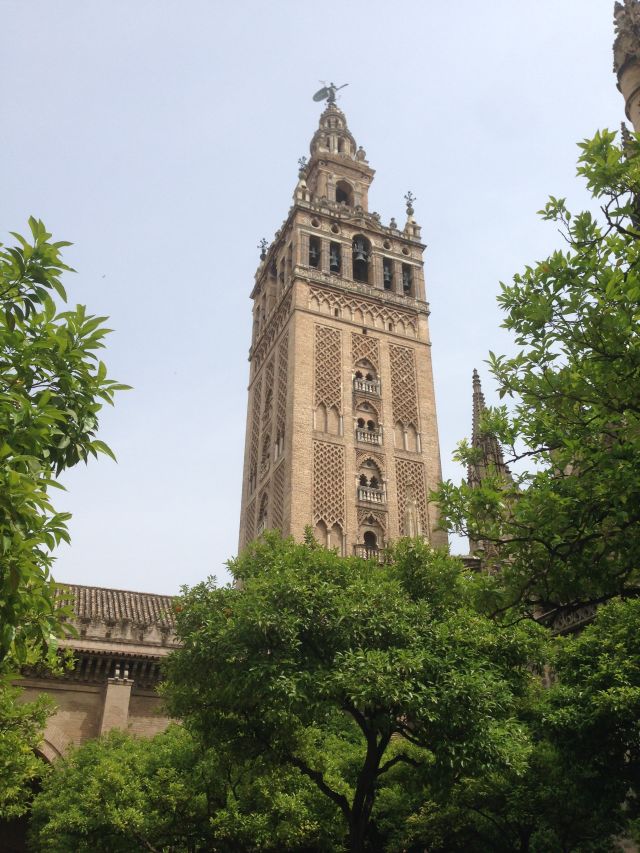 Well this minaret wouldn’t look out of place in Morocco! Sometimes it is easy to forget that you are in Spain when in Andalucía, as it can feel and look so Moorish due to its former al-Andalus incarnation that you could very easily be in Marrakech or Algiers, for example. This minaret, La Giralda, is the tower that was built for what was intended to be the Mosque of Sevilla.

It towers, literally, over the typical patio courtyard lined with trees and surfaced with cobbled ground. The intricate carving of the stone all the way up the minaret is seen all over these relics of Islamic architecture and I often wonder at just how much time it took for it to be done, by hand.

For illustration, here is a photo of the Koutoubia Mosque from when I visited Marrakech in October 2017. In fact, La Giralda was constructed to resemble this very minaret:

It’s easy to see the similarity. The echoes of al-Andalus are all over Andalucía.

The Cathedral of Seville, a UNESCO World Heritage site, is famed for being officially the biggest cathedral in the world. Of course, these sorts of acclaims are usually open to some caveats and in this case it is that where it is technically the third biggest cathedral in the world physically, the other two (St. Peter’s Basilica in the Vatican and the Basilica of the National Shrine in Brazil) do not have a bishop seated so that in some way qualifies the Cathedral of Seville as the largest in the world.

It is striking to look at, with its sandy coloured stone and Gothic architectural style.

One of the most curious things about this site is that it is almost definite that the remains of Christopher Columbus lay here in a tomb. This has been contested by other countries such as Peru, claiming that he is actually there but apparently DNA tests have proven it is indeed Columbus who rests in the extravagant midas-touched tomb in Seville.

This dominating birchwood oddity was completed in 2011, designed by German architect Jürgen Mayer after Seville put on an international competition for a project which would be both artistic and functional.

Given its name ‘parasol’, it is clear that they provide much welcomed shade in the fierce Sevillian heat, which can climb up to the late 40s (celsius). It is another world’s largest for this city as it is the largest wooden structure on the planet.

Is it aesthetically attractive? That’s subjective. My person opinion is that it is compelling to look at and gives the city a sort of dystopian look but when you climb it and are able to enjoy stunning views stretching right across the city, there’s nothing dystopian about it!

The locals were not all so pleased while construction was taking place due to delays, the cost of upwards of 50 million euros and as I imagine, six years of construction works which comes with the usual eyesores and noise pollution. I’d have to ask a sevillano/a what they think of it now but I like to think that maybe they have warmed to it over the years, in the same way some (although not all!) Parisians eventually grew to love their Eiffel Tower.

There is a bar at the summit of the setas which is a great place to sit back and view the city from high above, and there are sets of binoculars fixed along the different levels of the structure which cost no more than 1 euro to use.

This ancient palace is my highlight of Seville. While it does not possess the breath-taking vastness of the Alhambra in Granada, it is completely stunning in its ornate, exotic Mudéjar, Renaissance and Baroque fusion design and is the best conserved monument from the al-Andalus era. It is still used by the Spanish royal family to this day when they are in Seville.

Here is a testament to its splendour- it was used as a filming location for ‘Game of Thrones’.

The presence of water is so common in such buildings, to provide the sensation of refreshment in the air, even if only for a placebo effect. The sound of running water always relaxes me and you can quite imagine what it must have been like to live here centuries ago; it seems that not a lot has actually changed. 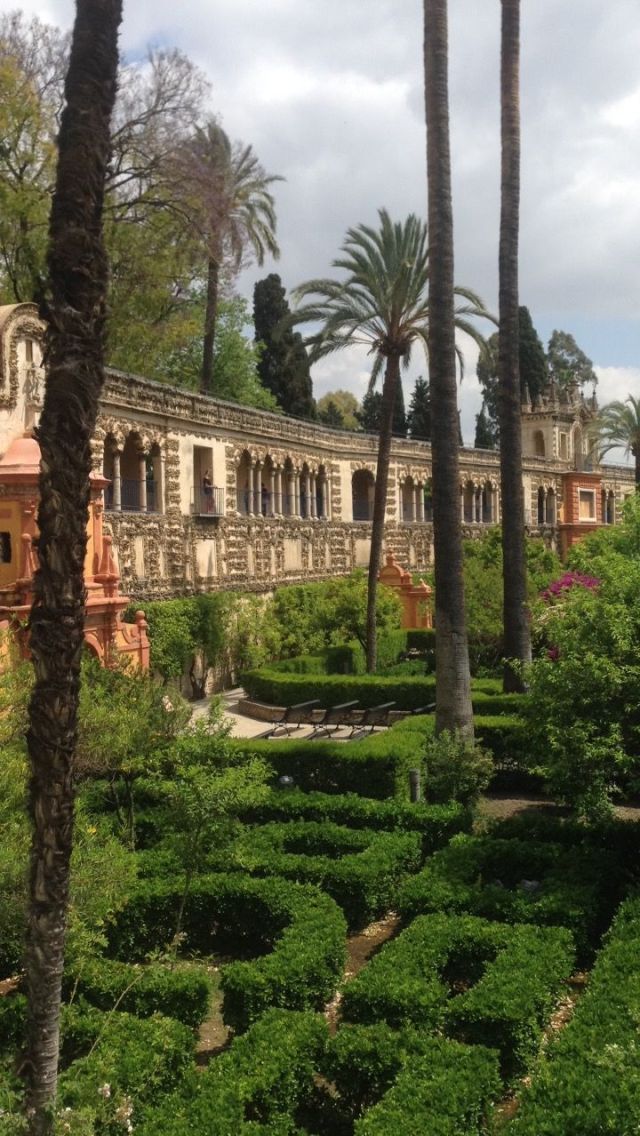 The sprawling gardens of the Alcázar are quite something to behold and again, could trick you into thinking you were there in ancient times or in an exotic country much further away than Spain.

Some children of the 90s might even have Jumanji spring to mind when they see the gardens with immaculate topiary, lofty palm trees, fragrant jasmine and majestic walls with their arched windows and pillars. 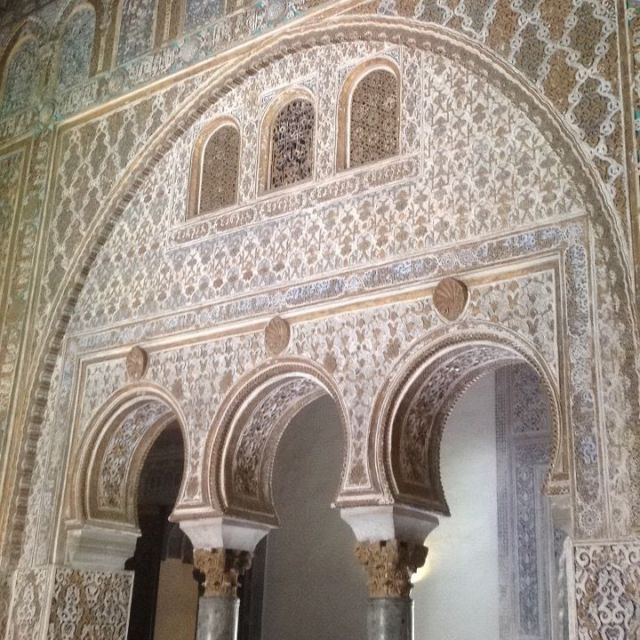 This photo above shows a spectacular, intricate and impressively well-preserved part of the Alcázar which I could not stop looking at! Marble, plaster work and Arabic inscriptions can be found all around this section, known as the Cámara de Audencias. The heavenly palette of creams, whites, browns and golds leave you in no doubt that this was built for royalty, commissioned by one former monarch amusingly (or not, for those he dealt with) known as ‘Peter the Cruel’.

There is so much more I could write on each of the above places and I was also tempted to include more sites/sights but I will save them for a future post so as to not make this one too long! One clichéd word of advice for a day trip (or longer) to Seville is to avoid the burning summer months; when I first visited in July 2010 on a day trip from the Algarve, Portugal, I had never ever felt heat quite like it, I had to laugh it was that ridiculous! I recall it being around 47 degrees that day and ran for cover for anywhere selling cold drinks to cool down.

That day I had the nicest orange juice I’ve ever tried but maybe the refreshing effect made it seem nicer than it really was.

Speaking of which, Seville oranges are in their thousands all along the streets in the cooler months but Spanish people don’t consume them as they are too bitter; rather, they use them for marmalade and export it to Brits, whose love of Seville Orange marmalade is a source of amusement for many Spanish people…

Where are your favourite spots in Seville? What would you have included in this list?

Leave your comments below and let me know!