Of all of Spain’s architectural gems, the Alhambra Palace (UNESCO World Heritage Site) is its most precious treasure.

It is so stunning inside and outside, close up and from afar that it is impossible to take it all in- every corner reveals yet more painstaking artisanal carvings and monuments and astonishing views across Granada. (Read about the city of Granada here)

Situated in the hills overlooking the city, with the snow-capped Sierra Nevada mountains in the distance, its presence can be felt at all times in this city and there are several vantage points for the best views such as the Mirador San Nicolás (pictured below): 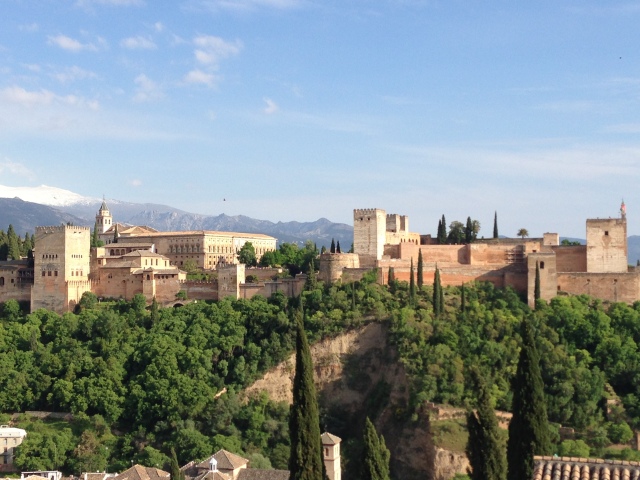 “To experience the Alhambra truly is to see it with your own eyes and explore its enchanting grounds..”

I think very few people would argue against that the Alhambra is the most impressive relic of al-Andalus, another gift left behind by the Moors.

Construction of this mammoth palace began in 889AD but was gradually expanded into a grand complex. Alhambra translates as ‘the red one’ from Arabic which you can see in the brickwork in the photos.

The photo below is of the Patio de los Leones (courtyard of the lions) and one of the most well-known parts of the Alhambra due to its aesthetic beauty, central water feature and statues of lions protecting it.

The Alhambra was initially built as a fortress to keep a watch over the city for potential invasions but eventually became a majestic palace situated on the left bank of the River Darro.

My parents and I stayed in the Hotel Alixares which was located ideally at the side of the Generalife gardens of the Alhambra. The downside was each day, to get to the Albaicín neighbourhood, we had to descend the steps of the Cuesta del Rey Chico and later, in the searing June heat, ascend them to return to the hotel.

Fortunately, it is quite scenic with lavender bushes and butterflies floating around, with beautiful views of the sunset between the trees if you’re there at the right time: 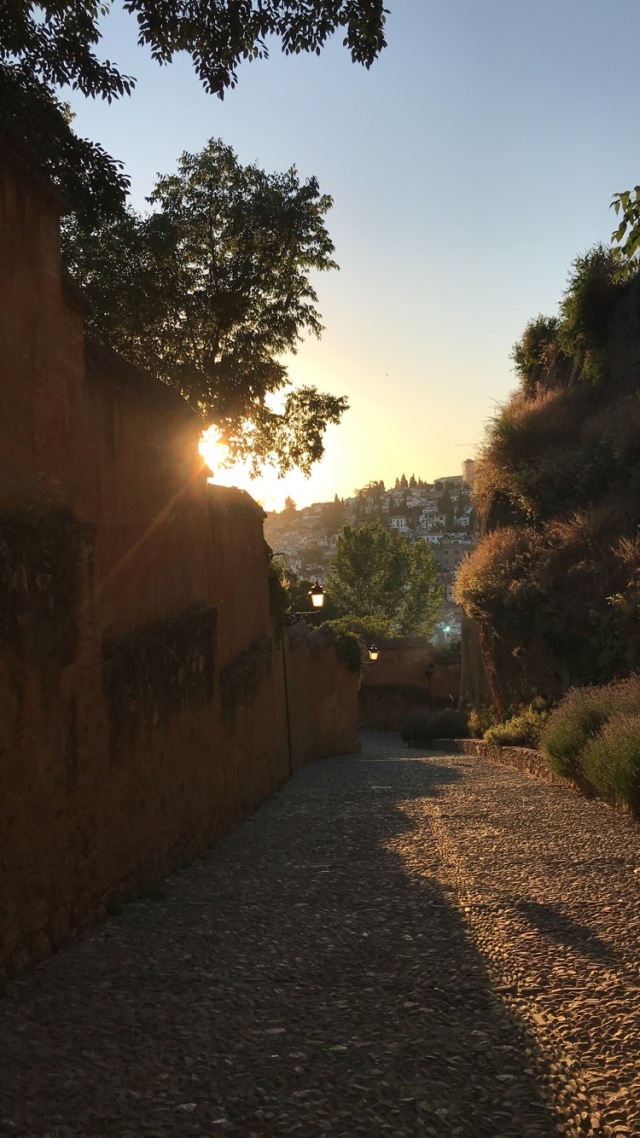 The site of the Alhambra is split into its Alcazaba (fortress), Generalife (gardens) and Palacios Nazaríes (Nasrid palaces).

A day at the Alhambra can take around four hours or even more in order to take in as much of it as possible. What has fascinated me on my three visits has been the extent of the intricate carvings into marble and stucco and other materials throughout the majority of the complex.

I cannot even imagine how much manual work and how many hours went into this and how well preserved it is today.

Here is a photo which shows just a small area of this highly skilled and stunning carving and tile work in one of the palace rooms: 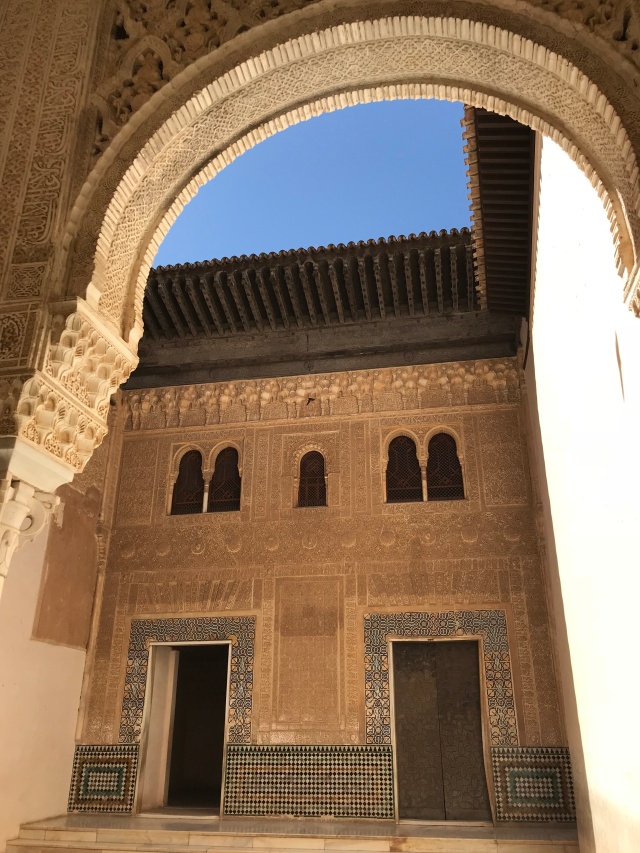 This shows the stylistic similarity with many buildings in Morocco due to the obvious Moorish influence. I have quite a thing with tiles so I am usually in my element whenever in Andalucía, Morocco or Portugal 🙂 .

Walking around the Alhambra in summer, you are cooled by the surroundings of marble all over, the shade from the ceilings and the abundance of trees outdoors. True to typical Andaluz patios, there are also plenty of water fountains which provide the sensation of being cooled down, even if you only hear the running water and don’t actually come into contact with it.

On top of this, there was the Queen’s dressing room and a room for the Emperor.

Admission to the Alhambra

As of August 2018, the opening times and ticket prices for the Alhambra are as follows:

From 1st April to 14th October:

From 15th October to 31st March

Please be aware that it is quite difficult to obtain tickets to the Alhambra at any point in the year so you should look to book yours a month in advance. I have known plenty of people to be left disappointed when they have tried to get tickets a couple of weeks beforehand.

It remains an incredibly popular tourist site; I even found it easier to get tickets to the Palace of Versailles in Paris for example. I’ve never known a site which requires the purchasing of tickets a month beforehand! 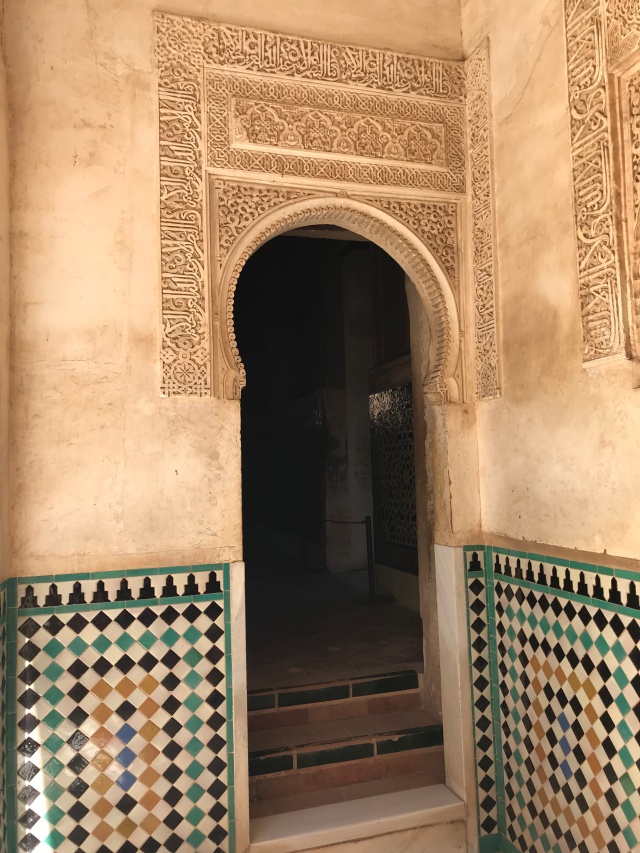 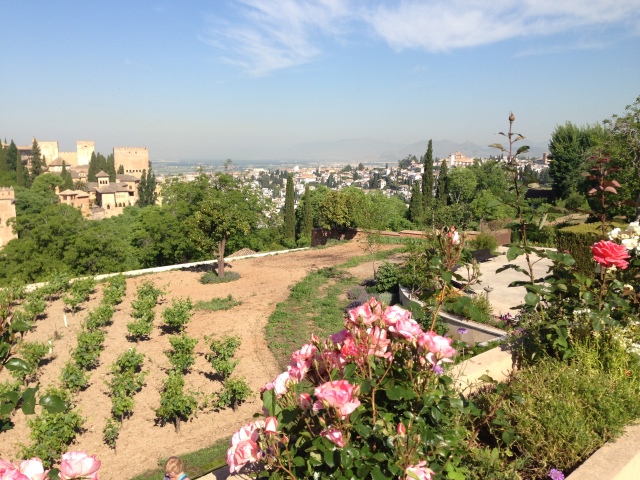 As if the palace itself wasn’t enough, the extensive, sprawling gardens leave you yet another treat for the senses. My visits to the Alhambra have been in spring and summer when there have been the most impressive array of flowers and trees with all the buzzing of bees and butterflies around as you walk through.

The views are spectacular, often framed by arched stone windows or a floral arch trellis.

To experience the Alhambra truly is to see it with your own eyes and explore its enchanting grounds.

I have been twice during the day and once at night and it could never bore me; I imagine I will visit plenty of times more in the future.

So for a different Spanish holiday next time around, look into flights from the UK to Granada or even fly into Malaga and combine a few days on the beaches of the Costa del Sol with a few cultural, bohemian days in Granada with an essential visit to its pearl, the Alhambra. Even better if you’re in Spain with a hire car to do a thorough tour of Andalucía!

Just don’t forget to purchase your tickets a couple of months in advance.

2 thoughts on “The Alhambra of Granada”

🇪🇸 I haven’t posted anything from this for a while but I’ve recently made a return to writing my memoir of living in Spain. This is an extract from chapter 1 from my second night in Córdoba, the night I signed the contracts on an apartment with my new landlady. 🇪🇸 #maríalópez
I wrote this sonnet a few weeks ago as part of @writers_bloc_north_west ‘s sonnet writing workshop. It was a good challenge writing to this particular form! 🌴☀️🇪🇸💃🏻
A lil blurry one from @the.hiphop.hq last Thursday 🎙
🌊 My sister asked me to write a poem about #crosbybeach because she lives nearby and wanted to frame some words set on a photo she took for her hallway. You can go to tropical beaches, Mediterranean beaches, and they’re stunning… but there’s just something about Crosby beach isn’t there 🤩 🌊
La traducción en español de mi poema ‘Málaga Jasmine’. Prefiero esta versión! Si hay algunos errores, por favor, dímelos! 🌸 🇪🇸
🌸 Málaga Jasmine 🌸
🇦🇹 Latest travel blog entry just uploaded on learning how to ski in Austria! Link in bio! 🇦🇹 🎿 ⛷❄️
@_positivepoetry have created a beautiful compilation of poetry and art called ‘Be Yourself, Everyone Else is Taken’, In Other Words Vol.II and I’m honoured to have my poem ‘Lineage’ included! All the artworks inside for each poem are gorgeous and it’s filled with uplifting & positive words cover-to-cover. ☀️🌸🪴
Loved reading my latest poetry and my first bit of Italian at @jimmys alongside a FAB lineup last Wednesday, thank you to @saint_vespaluus for inviting me! 🌴