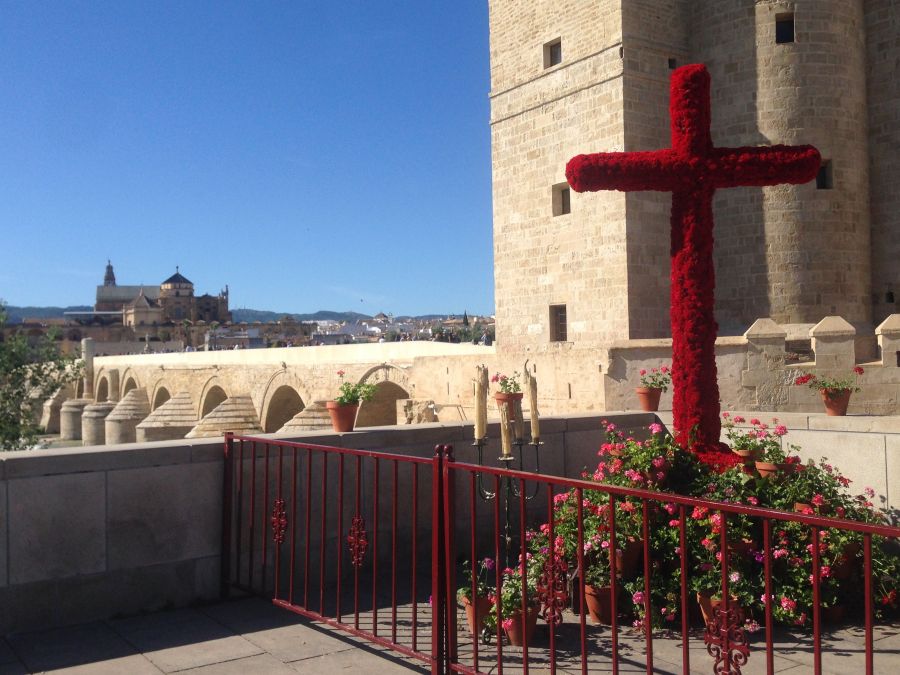 Next up in line in the Córdobes spring calendar after the Cata del Vino: Córdoba’s Annual April Wine Festival is the ‘Cruces de Mayo’. I think of this as a sort of ‘pre-feria‘, which is the culmination of the festivals spread across April and May each year.

It’s concept is this- Córdoba has dozens of Catholic brotherhoods, associated with each of the churches in town. It is so common to see a church on a street corner here that I often don’t even notice them! When I lived in the heart of the historic district, I used to love passing my nearest church on a Sunday at letting out time, to see the older population exiting church after Mass, decked out in their Sunday best replete with pearls, glamorous black sunglasses and twinsets.

In ‘Cruces’, each of the participating brotherhoods create a towering cross adorned with flowers, often with hanging baskets and other Catholic paraphernalia draped around. There is a contest to decide the top three crosses of the year.

“The ubiquitous palm trees sway in the background of almost all crosses and there really is something quite special in the atmosphere as the sun goes down and the sky fades through all the tones of blue until nightfall.”

Adding significantly to the merriment is the presence of the pop-up bars stationed at each cross. The staple drinks vended include Andalucían Cruzcampo beer from Seville, tinto de verano (sometimes referred to as tinto con limón or vargas in Córdoba) which is red wine topped up with lemonade or Casera (a mild tasting, almost flavourless fizzy drink) and plenty of hefty ice cubes. You can expect to pay a wonderful 1 euro 50 for one of these drinks so even if you attend all 4 nights of ‘Cruces’, you won’t be breaking the bank.

The signature drink of this festival however is called rebujito. It is served in a plastic jug with plenty of ice; a mix of fino (a dry white sherry wine) with 7up. They don’t give you glasses or cups for this but small plastic thimbles, sort of like shot glasses but you don’t down the drink, you sip it slowly.

It took me a while to like this drink as at first it tasted quite bitter to my foreign tongue but now I’ve sort of grown to quite like it! A jug of this costs around 5 euros and the nice part of it is the sharing aspect.

You won’t find your little thimble cup empty for long before someone lunges over with the jug and tops you back up. It’s deceptively strong as well…

With the loud music which is only permitted by the council to be played until 2am, it can be quite easy to forget sometimes that this started as a religious celebration! An intriguing contrast is that alongside the Cruzcampo adverts stuck up on the makeshift walls, you’ll see traditional Catholic imagery such as corner-peeling pictures of Jesus on the cross or the Virgin Mary crying for her loss with rosary beads draped over.

Depending on which cross you visit, the style of music can vary slightly. In 2018, there were 48 crosses from participating brotherhoods. Most of them play the popular pop or reggaeton hits of recent years then switch suddenly to rather old-fashioned crooners from the 70s, yet the popularity of these songs is unfaltering.

Imagine the type of song that’s played at a wedding party later on when everyone is drunk and in arms singing along and that’s pretty much it, along with the usual ‘Macarena’ by Los del Río and ‘Bamboleo’ by the Gipsy Kings (who are French- who knew?).

One time, I was at a very busy cross with some friends so we queued for a good while to buy our drinks tickets then got a few jugs of rebujito to share and last us. More and more people began to jam into the small area and I suddenly felt a slow-motion surge against me, as if I was only dreaming it.

The force grew slowly stronger then I realised that some people further along were falling and that domino-effect was heading my way… I felt a bit of a panic rise in me as the fold-up table with our drinks on began to cave in. Everyone in the vicinity fell to the floor in a sort of human avalanche but luckily it didn’t result in crushing, thank goodness. (I am such a claustrophobe!)

Just as I began to dust myself off and scramble back to my feet, I noticed that in all the chaos, my friend had artfully half-fallen over but had salvaged our jug of rebujito which was held triumphantly in the air like a trophy! At least we didn’t have to queue again…!

As in the Cata del Vino, you can also buy food at these bars but I’ve never bothered to be honest. Too little space and too much dancing around you with no tables so I usually eat well before leaving my home for the night. Other than the bars and music, I am also drawn to the quaint and cute decorations of many of the crosses such as in the photo below.

The Plaza de las Cañas (just off the Plaza de la Corredera) is one of my FAVOURITE plazas in Córdoba and this year I got round to seeing its cross. I don’t have a photo but I made sure I took a few of their gorgeous little bar with colourful fairy lights in the typical ball shape of the Feria which hang across a bit like Christmas streamers.

The ubiquitous palm trees sway in the background of almost all crosses and there really is something quite special in the atmosphere as the sun goes down and the sky fades through all the tones of blue until nightfall.

This year, I know two people who have made it their mission to visit all 48 crosses across the 4 days. Planned with military precision, they presented their now dog-eared, circled map with pride to show their progress. The obvious question here was: “and have you stopped for a drink at each one?” and the obvious answer was “yes”.

The weather around Cruces is usually quite warm which is amplified if you find yourself at a particularly crowded spot however this year it was quite breezy and even got a bit chilly later on. Spring has been a long time coming to Córdoba this year with weeks and weeks of rain up until two weeks ago when now the sun is finally beginning a shy appearance. Feria is now only less than 3 weeks away which will surely be roasting hot, it’s mad how drastically the weather changes here!

Until next year, Cruces de Mayo, the wonderful flowery, boozy festival which is in fact held in April, not May!

3 thoughts on “Cruces de Mayo in Córdoba- 48 Floral Crosses with Bars and Music!”

🇪🇸 I haven’t posted anything from this for a while but I’ve recently made a return to writing my memoir of living in Spain. This is an extract from chapter 1 from my second night in Córdoba, the night I signed the contracts on an apartment with my new landlady. 🇪🇸 #maríalópez
I wrote this sonnet a few weeks ago as part of @writers_bloc_north_west ‘s sonnet writing workshop. It was a good challenge writing to this particular form! 🌴☀️🇪🇸💃🏻
A lil blurry one from @the.hiphop.hq last Thursday 🎙
🌊 My sister asked me to write a poem about #crosbybeach because she lives nearby and wanted to frame some words set on a photo she took for her hallway. You can go to tropical beaches, Mediterranean beaches, and they’re stunning… but there’s just something about Crosby beach isn’t there 🤩 🌊
La traducción en español de mi poema ‘Málaga Jasmine’. Prefiero esta versión! Si hay algunos errores, por favor, dímelos! 🌸 🇪🇸
🌸 Málaga Jasmine 🌸
🇦🇹 Latest travel blog entry just uploaded on learning how to ski in Austria! Link in bio! 🇦🇹 🎿 ⛷❄️
@_positivepoetry have created a beautiful compilation of poetry and art called ‘Be Yourself, Everyone Else is Taken’, In Other Words Vol.II and I’m honoured to have my poem ‘Lineage’ included! All the artworks inside for each poem are gorgeous and it’s filled with uplifting & positive words cover-to-cover. ☀️🌸🪴
Loved reading my latest poetry and my first bit of Italian at @jimmys alongside a FAB lineup last Wednesday, thank you to @saint_vespaluus for inviting me! 🌴