Spontaneous trips often turn out to be the best trips, ironically as you don’t have much time to plan what you are going to do with your time there!

I booked a train to El Puerto de Santa María (just under 3 hours from where I am in Córdoba) on a whim when some friends said they were going to go for our puente (bank holiday weekend but of 4 days).

As I had never been before and it is located in the province of Cádiz which I adore, I thought why not?

El Puerto de Santa María is in the Cádiz province, along the Costa de la Luz. It is positioned between Rota and Cádiz Capital, a train station away from Jerez de la Frontera. Thanks to its situation on the Atlantic ocean, it is blessed with the soft fine golden sands of this region of Andalucía and enjoys winds suitable for surfing (however Tarifa, further down at the bottom of Europe actually!, wins the prize for this- read about Tarifa HERE).

We arrived around midday to rather unusual cloudy May skies with a slight chill to the breeze. I still enjoy a beach walk even when it’s cold, so we walked the stretch of this beach, Playa Valdelagrana, which is lined with very attractive chiringuitos (beach bars).

Fortunately, the sun was intermittent with the clouds so by the time sunset came, the clouds had finally dispersed and we sat at this chiringuito to order a drink and watch the sun descend into the ocean.

One thing which came as a pleasant surprise was how good the food is here! This region of Spain is famed for its sherry and pescaito frito (fried fish and seafood) but neither are really to my taste.

We went with the chiringuito barmaid’s recommendation to dine at a seafront restaurant called ‘El Chicharron’ and what a treat it was! A chicharron is a speciality of the area, which I can only describe as a sort of soft, salty piece of pork rind which they served us free as an appetiser in a cone. A Spanish twist on a cone of chips at Blackpool!

The waiter at this restaurant was lovely and could not have been more friendly or helpful in advising four very indecisive women from abroad. We shared salad, fried cheese with a raspberry sauce and each got a plate of seabass served on a bed of rice mixed up with green pesto and melted cheese. It sounds like a strange combination but it was wonderful, one of those meals you still think about the next day. I WILL be trying this myself at home but I can only hope it will turn out as good. We also shared a couple bottles of very reasonably priced verdejo wine, which is like a young, dry, local white wine which was served in an ice bucket- all the trimmings without the expense!

If you ever find yourself in El Puerto de Santa María, I can not recommend this place highly enough. You can visit their website here: http://www.elchicharron.es

After this, we semi-stumbled back to our hotel which was conveniently located right on the beach front and also at a very good price. (We visited slightly out of season so probably got lucky) The hotel was Puerto Bahia & SPA.

The next day was an on-off attempt to sunbathe which was dampened by a sudden opening of the skies which had us all running for cover to the nearest chiringuito.

As is often the case in Spain, it was all over within 10 minutes, enough time for a coffee, then back to the beach again. This type of sudden torrential downpour has a beautiful name in Spanish- aguacero.

I even had time to write a poem on my iPhone notes app when I got myself back on to the lounger with a dry towel, sun shining down innocently as if nothing had happened:

Life so calm, so slow

Tears through the heavy air

That temporal sun can kiss goodbye

I upload my poetry to my Instagram writing account which you can find at Laura Ferries Writer and my recent posts appear in a feed on each page of this very site!

“Fortunately, the sun was intermittent with the clouds so by the time sunset came, the clouds had finally dispersed and we sat at this ‘chiringuito’ to order a drink and watch the sun descend into the ocean…”

Later in the afternoon we wandered up to the train station to change our return train for the following day to a later time (I am AWFUL at waking up early plus the weather forecast looked much better for the following day so no point in leaving at the crack of dawn!). Hot after a 45 minute walk in the peak afternoon sun, we decided to look for somewhere to sit down and have a drink. We had the good fortune to stumble across a mini festival called ‘Birra & Art Festival’ in the Plaza de Alfonso X el Sabio (where the Castillo San Marcos is) in the town centre: 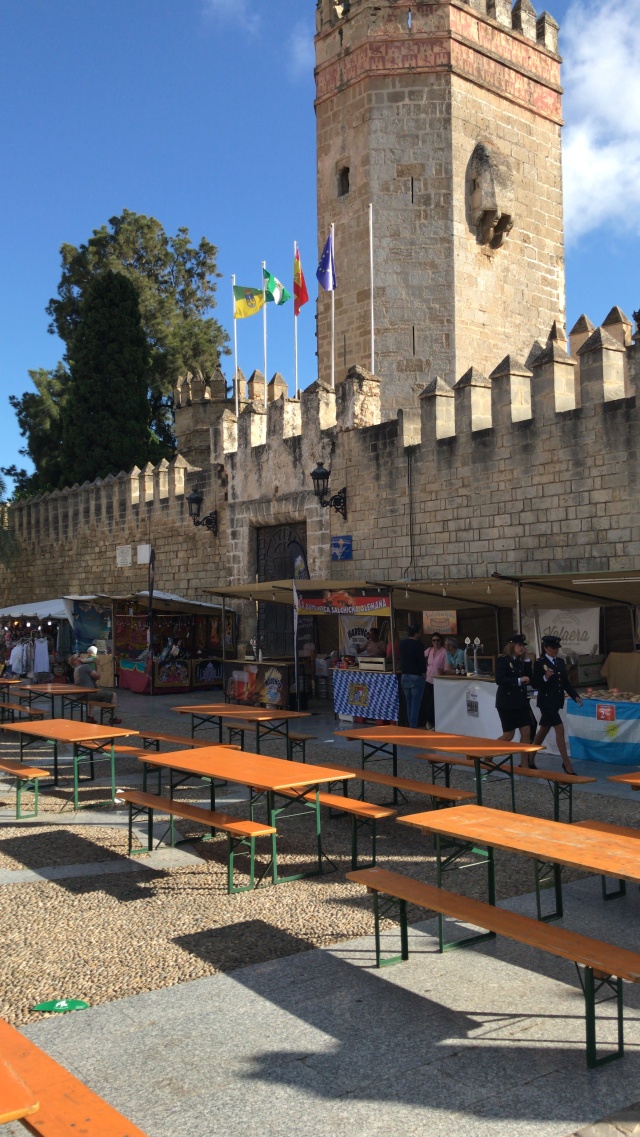 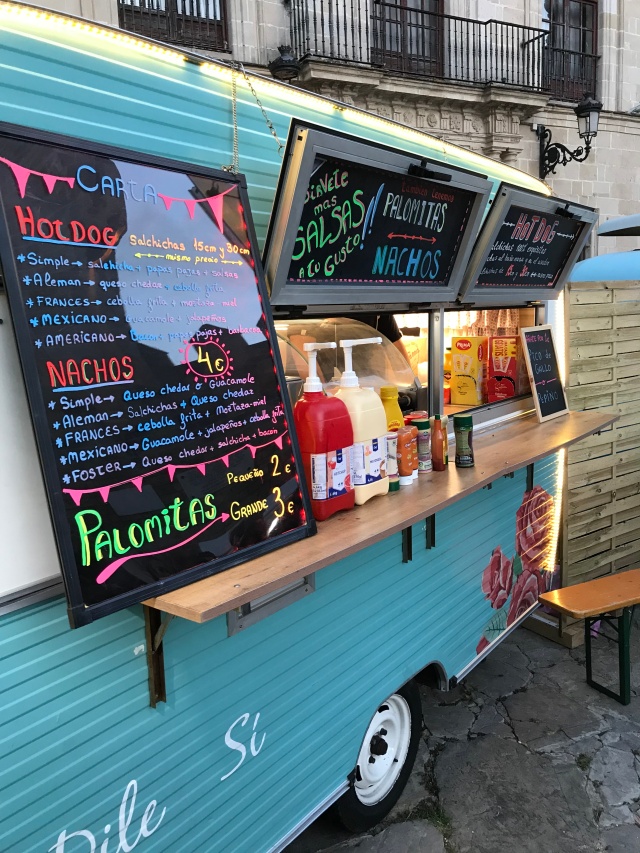 Owing to the Spanish penchant for 80s rock music (something I’d love to know why- someone once said to me it was a post-dictatorship rebellion in the 80s after Franco died in ’79… not entirely sure though) we were treated to some head-bangers as we ate a hotdog and drank red wine out of a plastic cup (classy– but who is complaining at 1.50euros for a decent rioja?) before we ran on to another seafood restaurant where I had scallops and actually tried a smidgen of sea urchin…. *shudder*.

Known as erizo de mar  in Spanish which disconcertingly transliterates as ‘sea hedgehog’, (however is a sea anenome, nothing at all like a hedgehog!) for a fussy eater like me this was quite a bold move. Even the tiniest crumb of its batter was enough for me, it had an earthy, bitter taste despite it being from the sea, then the waiter conceded that he himself doesn’t like them!

El Puerto de Santa María makes for a splendid little long weekend get away or if you are visiting from outside of Spain, a lovely excursion from Seville, Huelva, Cádiz or even the Algarve. You could fly into either Seville or Faro airport, and if you are holidaying in Cádiz, it is worthwhile even hiring a car and seeing all of the breathtaking Costa de la Luz.

What is your favourite part of Cádiz? Which is the best beach for you along the Costa de la Luz? Have you ever visited this town which is not so popular with Brits, moreso with Germans and the French? Let me know your opinion in the comments box below 🙂

Spanish Glossary for this Article

If you are learning Spanish or want to pick up some holiday-handy words, each article will now end with a collection of the Spanish words and terms featured:

Pescaito Frito- technically it should be pescado but pescaito is written in line with Andaluz dialect. It refers to fried fish and seafoods. 🍤🐟

Erizo de mar– a sea urchin (not a sea hedgehog, how it would literally translate)🐡

One thought on “A Brief Guide to the Charming El Puerto de Santa María, Cádiz”

Magical 💫✨ @florenceandthemachine @florence
Two of my haiku from Sefton Park last Saturday 🌱I found out today from @jonathanaylett that this type of walk has a name in Japanese tradition: ‘Ginkgo Walks’ 🌸 ~ I love it! 💕
🌱Sefton Park Poetry & Photo Walk 🌱 last Saturday. Beautiful morning with lovely people, taking photographs, writing poetry, and taking the time to be mindful on a cold January morning. 🌱 Stay tuned for March’s Calderstones Park event 🌱 @cammie_byrne
Written in spring 2022, a sort of ode to finding nature and colour in the greyest of places. Not quite daffodil season yet but it’s not far away! 🌼
Such a lovely evening at the new @readerbarandrestaurant on Mount Pleasant for Spoken Word 18 🎙️ ~ great goulash 🌶️, wine 🍷, poetry 📖 and boss company 💃🏻🕺🏻~ highly recommend calling in to try their gorgeous menu and all profits go to @thereaderorg @thereaderatcalderstones reading charity.
Yet another “bad apple”, really? 🍏🚨 #davidcarrick #20years
𝒜𝒻𝓉𝑒𝓇 𝓉𝒽𝑒 𝐻𝑜𝓃𝑒𝓎𝓂𝑜𝑜𝓃 🍯💛
📍Up on the travel blog: Turin- City of Chocolate and Coffee 🍫☕️ link in my bio 🌎
Bitter Grapefruit ⚡️