Plazas are synonymous with Spain and not just because it’s a Spanish word (for square).

You immediately think of the Plaza Mayor in Madrid or the Plaça del Sol in Barcelona. Here, I will show you my personal four favourite plazas of Córdoba. Anyway, I have to say I think the Plaza de la Corredera is much more attractive and authentic than the Plaza Mayor! Sorry Madrid lovers…

Now, I have a personal connection to Plaza de Jerónimo Páez and that is because it was virtually my garden for 15 months. I lived in a flat with a terrace which backed out from my bedroom to a direct view of all of the happenings in the square.

For an initiation into living in Andalucía, it couldn’t have been better. I would come home after work, open the door to the terrace and lay on my bed for half an hour to relax, listening to the flamenco guitar from the Bar La Cavea in the plaza below drift up into my room.

Customers were never loud; you could just hear gentle chatting and smell sizzling chorizo al vino which left me in no doubt where I was.

My friends thought it was apt when I first moved to Spain that I would end up living in a flat that was directly above a bar, with the words ‘Buen vino‘ (good wine) painted on the side wall. This is true and it always made for a great place for my visitors to spend some time while I was at work during the day however its beauty is not just the bar.

The square itself is absolutely stunning. Seriously. Plaza de Jerónimo Páez is more commonly known as the ‘Archeological Museum Square’ due to the fact that there is indeed such a site there; the former Roman theatre of which only sparse ruins are left behind. Still, the museum is worth a quick look as it is free and some of the old seating tiers are visible and there is some interesting information and a few artefacts such as well-preserved chess pieces to be seen.

“I would come home after work, open the door to the terrace and lay on my bed for half an hour to relax, listening to the flamenco guitar from the Bar La Cavea in the plaza below drift up into my room…”

The plaza is flanked by towering palm trees and tight-knit orange trees. The waiters at the bar are so kind and great with children and one time when my friend came to stay with her then 3 year old, one of them would pick oranges off the trees for her to play with at the water fountain.

She must have smuggled this back to my flat and dropped it somewhere as when I moved out of the flat 15 months later, I found that orange behind a heavy chest-of-drawers and it resembled a Roman fossil itself!!

This plaza is known by many locals to be the most aesthetically beautiful one in Córdoba and for this reason it is also used as a site on ‘La Noche Blanca del Flamenco’, a night dedicated to staging flamenco across the city.

I first discovered this little but beautiful plaza when I attended the outdoor PhD graduation party of a colleague. It was a sunny and not too cold February day and I was immediately captured by the location- palm trees and an archaic looking church in the background with a little food market and bars which serve their drinks and food from a window hatch; I knew I would be returning here regularly.

The typical Andalucían white and yellow buildings adorned with black wrought-iron twirly balconies and arched windows gives the plaza an exotic look along with the abundance of palm trees swaying gently along.

The Plaza de las Cañas is just along the narrow Calle Sánchez Peña off the main Plaza de la Corredera. I much prefer the former as it is much sweeter and more authentic and I especially loved it as a site for a cross in the annual April festival of the Cruces de Mayo.

There was a small but pretty floral cross surrounded with Catholic images and a marquee bar at its side, decked out in little twinkly paper ball lights. Traditional Sevillana music played on until 2am and it was much less crowded than other sites of the crosses.

The main bar to visit here is the discrete hidden treasure chest of ‘Los Cuatro Gatos’ There is a poster of ‘Le Chat Noir’ in the window and inside the walls are hand painted murals. Sparkling chilled Cava is 3 euros a glass and they stock some excellent unusual red wines.

The local olives here are great and the best part of all is the music- sitting in here on a rainy day or outside on their terrace when the sun is shining while tunes from the 60s, 70s and 80s provide the soundtrack really is a great way to spend the afternoon.

“There was a small but pretty floral cross surrounded with Catholic images and a marquee bar at its side, decked out in little twinkly paper ball lights.”

Tendillas is the city centre of Córdoba. It is a large square with a clock tower which chimes out on the hour (and briefly every 15 minutes) and the tourist information stall. It is largely touristy, especially now there is Córdoba’s first branch of Starbucks present, but this is ok. It has a pleasant, busy atmosphere both day and night (sometimes especially at night, I remember walking through on my first Halloween and it was filled with hundreds of ghosts and witches etc).

There are shops, bars, restaurants, a pharmacy and ice cream parlours. The main bar there is The Gran Bar which I went to a few times when I was new in town and was unsure of where to go but to be honest I don’t rate it at all as it is overpriced, the service is poor and the staff are quite rude!

There are also a couple of other bars tucked away along the sides, shrouded by orange trees and they’re much cheaper.

The centrepiece of the square is of course the fountain, topped with the statue of El Gran Capitán, a Córdobes army general who fought in the Conquest of Granada and the Italian wars. In 2016, a prankster poured washing up liquid into the fountain and the whole square was avalanched by white foam and bubbles! I was away at the time but would have loved to have seen that to be honest!

Sometimes, stages are set up for flamenco shows or one-off musical performances. It is also the site of the Christmas markets, the Japanese festival, the Medieval Market festival and last year there was even the most humble of Gay Pride manifestations here.

I live in hope that one day Córdoba will have its own Pride march and celebrations, as it is an aspect of the culture here which still needs to be given the attention and respect it needs and deserves. 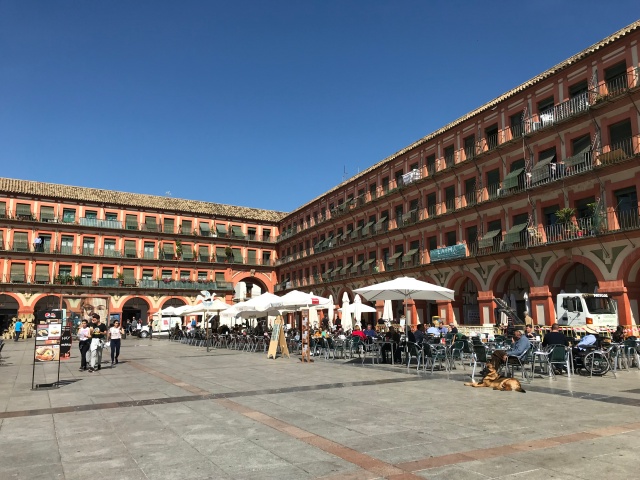 The Plaza de la Corredera is THE place to go when the sun is shining, either to sit in its direct light to catch a tan or do it the Spanish way and seek the shade under a parasol. What was once the site of a Roman amphitheatre, the old city prison and later a bullring, it is now a square made up mainly of apartments, bars, restaurants and a food market.

Food and drink here is CHEAP yet generally quite good. Brits- if you miss a good old English breakfast then I’ve discovered you can get one here although I can’t report on its quality just yet!

It is quite the sun-trap although there are plenty of shaded tables and chairs along the sides, under the arches. The Corredera is the main site on La Noche Blanca del Flamenco each June with thousands of people packed into the hot night air to watch the flamenco or local music artists such as India Martínez take to the stage.

By day, you’ll see a few shops selling their artesanal products such as woven baskets, Moroccan style tagines and local artwork. My friends bought me a poster from here of the Feria de Córdoba’s publicity art from 1953!

It was in the Corredera where I first tried Migas, a local winter staple food made up of breadcrumbs, olive oil, garlic and pieces of chorizo and lomo. Happy memories from the early days!

So, that’s the end of this round-up of my favourite Plazas in Córdoba.

What is your favourite Plaza here? Can you suggest one I haven’t included?

Let me know in the comments below!

5 thoughts on “A Guide to the Four BEST Plazas in Córdoba, Spain”