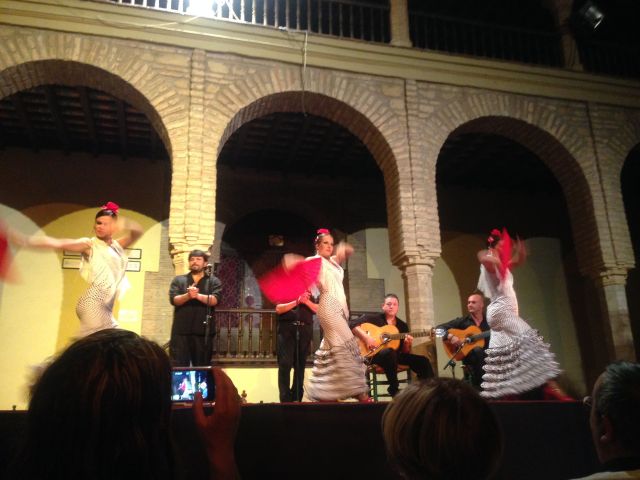 When I was a child, if anyone ever mentioned Spain, my mind would instantly be filled with images of whirling dancers, red skirts swishing round and castanets clicking, with onlookers clapping and shouting “¡Olé!”.

When I was 27, I moved to Spain. Andalucía, to be precise- the birthplace of Flamenco. I soon realised that my young imaginings were not as naïve as they seemed; rather, the culture of Flamenco penetrates the ground and the air here.

Originating in the gypsy communities of Andalucía around 500 years ago, it is still today a cherished and almost sacred tradition carried on generation after generation.

“I soon realised that my young imaginings were not as naïve as the seemed; rather, the culture of Flamenco penetrates the ground and the air here.”

The city centre has Flamenco schools, often located high up on the second or third floor of buildings which allow the sounds of stamping feet and the guitar strumming to float out of the window and into the streets below. Flamenco is alive and kicking and Córdoba makes a fabulous and authentic place to see a show in action, with its fierce summer heat and traditional Andaluz patios draped in flowers and tasselled, embroidered shawls hung along the walls.

Indeed, Flamenco is not all about the dancing. It is usually composed of passionate singing which comes right from the pit of the stomach, fiery guitar, clapping in a really tricky and rhythmic way and the tapping of the cajón (a box drum which the person normally sits on and plays from above with his or her own hands).

In fact, a Flamenco performance can exist without any dancing at all, it is not considered the most integral element. Another note on the singing- to hear it is almost operatic and sounds slightly Arabic and even my Spanish friends tell me they struggle to understand the words to the songs. Flamenco singing is powerful and demanding, conveying both pain and passion.

Córdoba dedicates a whole night (literally, as it begins at 10pm and ends around 5 or 6am) every year to its passion for Flamenco. Usually held around the 21st of June, in the peak heat of mid summer, the city lights up for La Noche Blanca del Flamenco (The White Night of Flamenco). More on that later.

For now, let’s look at what I consider to be THE best Flamenco show in Córdoba:

Calle Buen Pastor, 2. Opposite the Mezquita 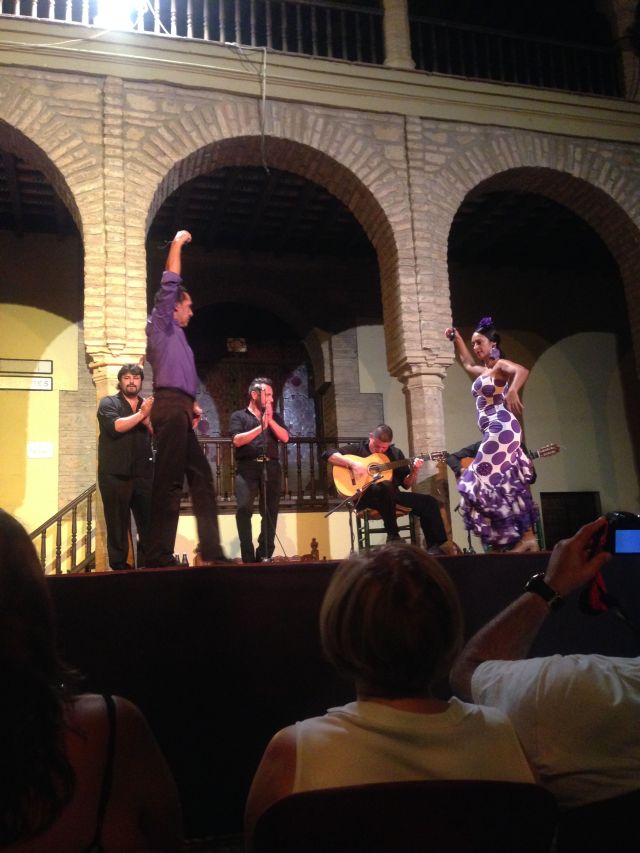 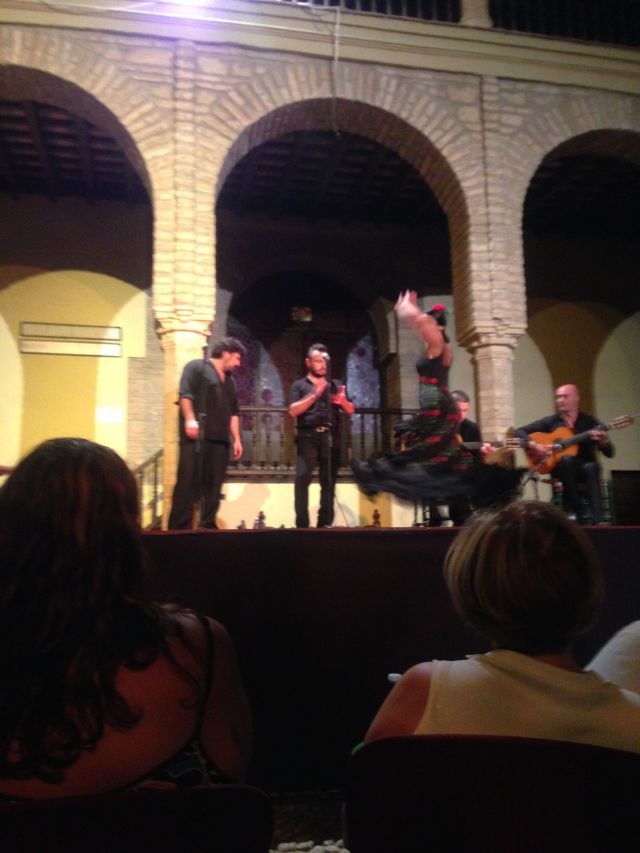 Apologies for the slightly blurry photos, the action is so fast it was hard to capture a still!

I have seen this show twice now and would certainly return again. Whenever friends and family come over to visit me in Córdoba, this is where I send them and it never lets us down. It costs 23 euros for the show plus a drink (this isn’t limited to only a usual beer or a wine, you can also choose a gin or rum or any spirit with mixer too so it is great value!). This show has been running for over 25 years now, 6 days a week. Monday- Thursday there is one per day which begins at 20:15, and Fridays and Saturdays have one which begins at 21:00.

The show lasts for around 2 hours with a mid-way interval. It is intense, captivating and you want it to never end. Flamenco tells the story of two people falling in love, with the dance, music and singing representing the attraction, seduction and falling in love. Here at Tablao Flamenco Cardenal, viewers are treated to top class performances by national award winning dancers and guitarists.

Silence in the audience is golden as it is considered utterly disrespectful to talk during Flamenco, except for the occasional ‘¡Olé!” after a particularly stunning moment. Flamenco builds up to a crescendo which culminates in a spiritual climax known as duende. This word does not translate in this context as it means ‘elf’ literally however it can only be described as I wrote before: a spiritual climax.

I once asked someone what ‘Olé’ actually means (another untranslatable word) and the closest way of relating to it is a sort of outcry of appreciation or sensory ecstasy in the moment. You will hear plenty of this during a Flamenco show and it is infectious! (You will also hear Spanish people shout this word if someone ever drops and smashes a plate or glass in a bar or restaurant but that is something altogether different!)

Tablao Flamenco Cardenal takes you through several scenes with different dancers having their moments to shine however the main stars are Victoria Palacios and Antonio Alcazar whose ‘love story’ we follow. They are usually accompanied by three elegant female dancers and a spectacular male dancer who is tireless and the sweat drips off him as he moves faster than anything I’ve ever seen!

Go and see this show if you are in Córdoba, it will stay with you. My dad saw it three years ago and still relives the experience, telling friends about it and watching videos on YouTube. I will leave you here one video I took myself:

Calle Pedro López, 3. On the street leading to the Plaza de la Corredera.

This Flamenco venue is much smaller and more intimate and only lasts for around an hour or maybe a bit longer. It does not have the same ‘wow factor’ as Tablao Flamenco Cardenal however it has a lovely family feel- they even brought their 2 year old son on to the stage during the interval who showed us some moves he had obviously picked up watching his family perform day after day, perhaps it is in his blood! If I return here in 15 years time, maybe he will be the main star of the show!

Tickets are only 12 euros, including a drink. This price is perfect for a smaller scale and shorter show. Nevertheless, it still shows some excellent talent and the venue is so beautifully decorated with fans, shawls and ceramic plates hanging all around. There is a typical Andaluz water feature in the centre of the patio and the whole room is dimly lit to add extra mysterious ambience.

The performers are clearly all so in love with their art and were so friendly and welcoming to me, my friend and my mum as foreigners.  Its location is excellent too as when you exit, if you want to continue your night out, just continue walking down the street to the Plaza de la Corredera which looks a bit like the Plaza Mayor in Madrid (but arguably more attractive) and is fantastic for a beer or wine with tapas sitting outdoors on a warm night. 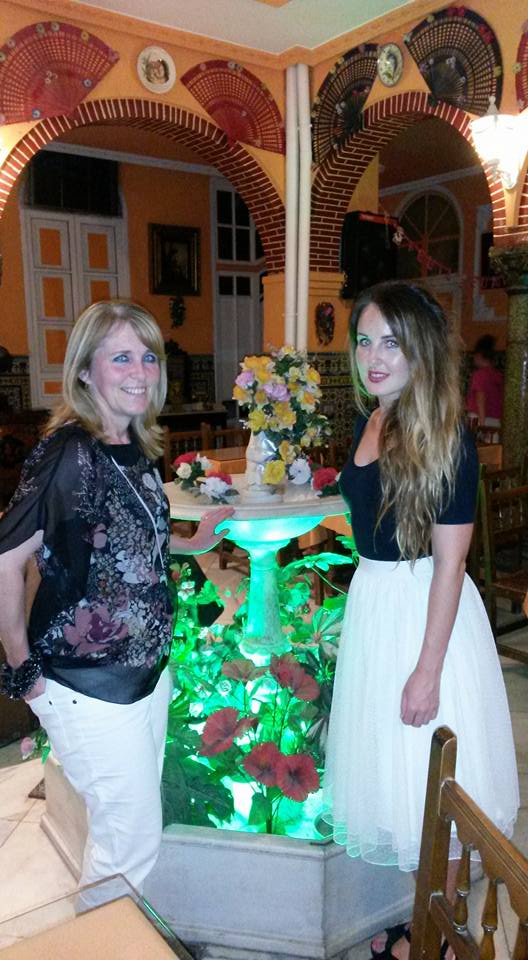 All around the city, held on one night every June

While there are several other venues to watch regular Flamenco, I will end this article on the annual celebration as mentioned at the beginning.

This night is usually scorching hot all the way through… I recall coming very close to fainting as it was so hot at 2:30am so to last all night is quite a test of dedication. However it is so worth it, the city becomes nocturnal and alive with dance, song, music and thousands of spectators, adults and children alike. Children must be delighted at being able to stay up so late on this night!

You can pick up the event programs at various locations around the city in the weeks leading up to it which inform you where to go and at what time. Popular (and stunning) places to watch the Flamenco are at the Patio de los Naranjos of the Mezquita and at the bank of the Guadalquivir River under the Roman Bridge. I have to say, it is quite something to watch Flamenco on stage with the backdrop of the illuminated Mezquita while everyone stands in silent awe. 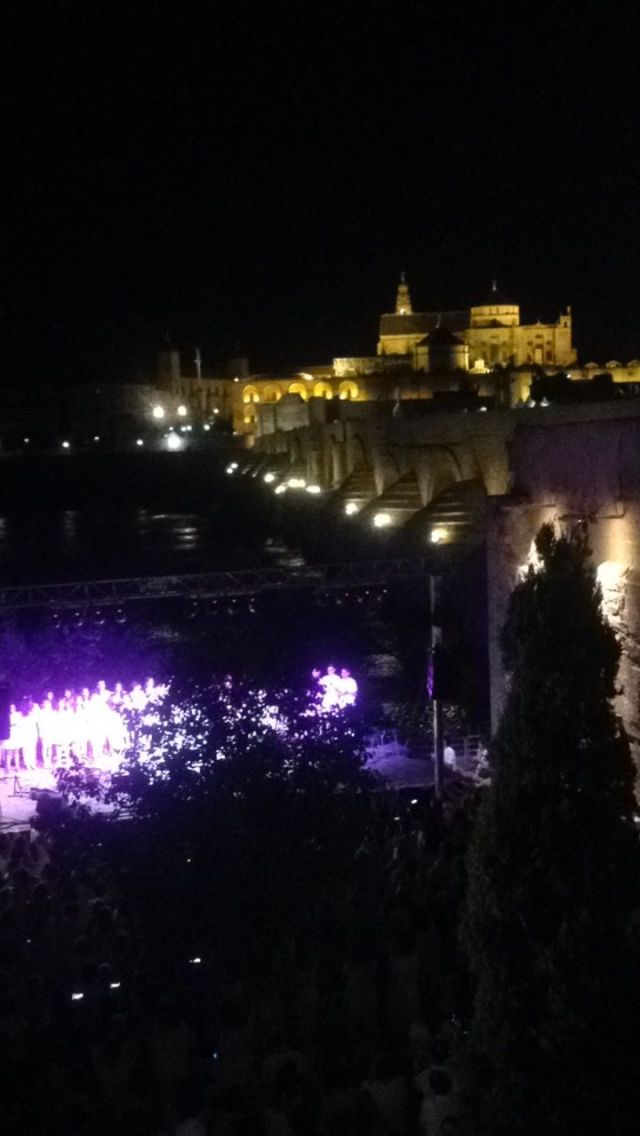 9 thoughts on “Where to see the Best Flamenco in Córdoba, Spain”