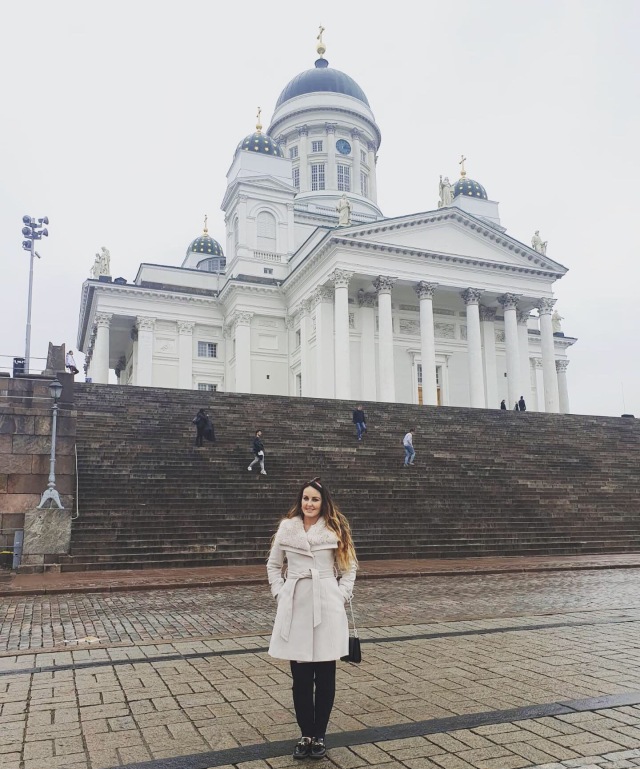 On a cold, blustery October day, we decided to jump a ferry from Tallinn to Helsinki where we would have seven hours to explore the capital of Finland.

It was an absolute bargain of £12 each way per person which was incredible when you think how much you can pay for a seat on a flight and how little legroom you get for it. (I say that as someone who is 5ft3″ tall, I can’t imagine how it is for tall people..)

The biggest luxury about taking the gigantic ferry over to Helsinki was the impossibility of becoming bored. There were bars, cafes and restaurants and the ability to walk around freely was a novelty.

Pulling into Helsinki, the first thing I noticed was how the terrain looked totally different. The fir trees on a little island before the mainland looked jagged and shrouded in mist. 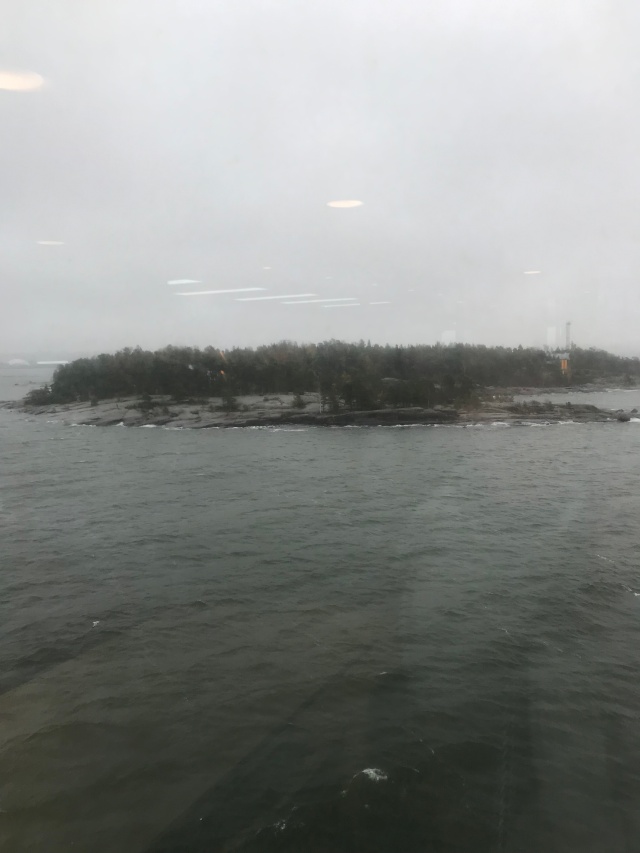 Disembarking, the sharp rise in wind was felt as it whipped my hair up into the air. The sky was a blanket of grey. No clouds, no colour. Drizzling rain made the choice between queue up at a bus stop or jump into a taxi very easy.

We were driven into Helsinki city centre by the loveliest driver ever who dropped us off at Helsinki’s Cathedral.

It looks like a strange hybrid between Grecian pillars and the domed style of Spanish cathedrals such as that in Cádiz, Andalusia.

Heksinki Cathedral is beautiful though with its pristine white exterior however the interior is austere and functional.

Like the city I am from, Liverpool, Helsinki has two cathedrals.

The other one is a Russian Orthodox cathedral and it stands incongruous from the rest of the Scandi-Baltic architecture that surrounds it:

For a Russian Orthodox cathedral, it did not captivate me in the same way the spectacular one in Tallinn did. Nevertheless, it is still interesting to look at it with its golden crosses, green domes and red brick structure.

“Pulling into Helsinki, the first thing I noticed was how the terrain looked totally different. The fir trees on a little island before the mainland looked jagged and shrouded in mist.”

Escaping the increasingly dismal weather, we entered the Old Market food and drink hall for a look at what the Finnish fare offerings were. I don’t like fish so the expected herring was not an option for me. We had a beer and a white wine and I picked up some Moomin biscuits for my mum and some local blueberry liquorice for my dad.

There were several Asian food stalls along with lots selling dried fruit, nuts and strange liquors.

Designer brands such as Gucci and Louis Vuitton were in abundance but where were the people? I looked again and saw that there were actually plenty of people milling through the streets. What was missing was- noise. Or was it really missing?

Looking online, it was verified that Finnish people prefer peace and don’t engage in small talk. They speak when they feel it’s necessary and allow time for silence and thought.

After living in Spain for a few years where it is generally quite loud in public places, with a lot of gesticulating and emphatic cheering, it can actually be really refreshing to observe people going about their day quietly.

After wandering round for a few hours wondering what to do, where to go.. we found ourselves missing Tallinn. Helsinki is pristine, attractive and peaceful and it is filled with fine dining restaurants and luxury hotels.

For a few hours walking round, it was an interesting way to pass the day but it didn’t capture me. I imagine though that an overnight stay with dinner and drinks at one of their top places would be a whole other experience though so I wouldn’t rule out coming back one day if I was in a neighbouring country again!

Have you visited Helsinki? What did you think of it?

Let me know in the comments below.

5 thoughts on “What to do in one day in Helsinki, Finland”

👣 Street Shrinking 👣
Absolutely gorgeous evening down at Crosby beach organised by the wonderful @mary.olive.writing filled with such lovely people, music, fire, incense, guitar, singing, poetry, mint tea and the waves of the sea 💙 thank you x 🌊🌊
🌊 Mersey Song 🌊 ~ this came from talking with people and their connections to the nature they were brought up around; near the coast or round hills or near forests or wherever else. It made me think about Liverpool people and how we seem to have an intrinsic connection to water 🌊.
🍂 I decided to translate this into Spanish once I came up with the ‘dolor dorado’ line.. and I find that Spanish nature words are always so lovely. I also used to really enjoy the (one week long 😂) Spanish autumns in Córdoba and Málaga 🍂🇪🇸
The killings of women by men don’t just happen out of nowhere.. they are the horrific culmination of an entire structure and culture of VAWG (Violence Against Women and Girls).
🍂 Autumn Equinox 🍂
✨~ Insurance Policy ~ ✨
🌊 ☀️Some recent shots of my second book, Lucid Dreamscapes ☀️ 🌊 {Link to order in bio}
Absolutely love the new displays along the English corridor and outside my classroom with my ‘Twelve Books That Changed the World’ selection & quotations. Literature is SO much more than the confines of the GCSE set texts and I’m so pleased our students will get this glimpse of what else is out there ♥️.