Some associate Spain with its beaches or its cities.

Some may stretch to thinking of its mountains and skiing.

However, in Part II of my Córdoba Pueblo Series (Part I was about Cardeña) I am going to continue showing you the joys, authenticity and incredible affordability of a trip to a Spanish village.

Do you want off the beaten track in Spain, where most places are already so well known to tourists?

All Spanish cities have pueblos in their vicinities so if you are in Córdoba and want to see the ‘real Spanish culture’ and spend only a handful of euros (I know that sounds vague but you really can eat a sizeable lunch for 5 euros as I did) then the villages make for a great glimpse into how the locals live.

Montoro is a small village just 45 kilometres east of the centre of Córdoba, nestled in the banks of the green and marshy Guadalquivir river: 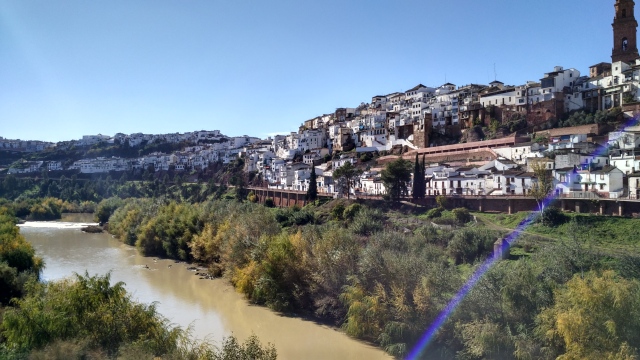 Upon arrival at the main carpark, you are greeted with the typical Andalusian whitewashed houses which initially seem crammed against each other however this is actually due to the narrow streets designed for keeping heat out.

The white exteriors act to deflect the sunlight beating down with no shielding for those right on the edge of the river bank.

A five minute walk into the town centre and what you find is a petite yet pleasant little plaza decked with numerous metal chairs and tables for each bar’s terrace.

I arrived fairly early on a bright, sunny and fresh December morning while people were still sipping their morning coffees and breakfasting tostadas with olive oil, blended tomato and jamón serrano. The square was filled with the calm stirrings of chatting and the hourly bell chime of the Torre de la Iglesia de San Bartolomé clock tower.

This very neat building which was originally built in 1548 was restored after the Civil War ended in 1979; it wouldn’t even occur to you to think that it had once been damaged by burning in conflict in 1936. The entire square is of soft redbrick which makes a visual change to the white houses along the river or the sandy colours seen more commonly in the city of Córdoba (the entire site of the Alcázar, for example).

Being honest, there is not an awful lot to do here but the whole point is just being here. It makes for a very lovely walk around as you pass quiet homes and family run restaurants and grocery stores. There is a really calm atmosphere as people just go about their day peacefully.

“Add to this the setting of a terrace positioned just on the edge of the hills on a street lined with orange trees heavy with their December harvests; their scent drifting along the street as the warm afternoon sun began to shine out, taking the edge off the winter chill…”

The most curious thing to see here in Montoro though is the Casa de Las Conchas (House of Shells) which you can find on Calle Criado- a very small, shaded street with not much else around it.

This residential home was built in 1960 by a man named Paco and his dedication was to cover the entire edifice which certainly now is- around 45 million shells collected from shores from all over the world adorn the façade. All of the exterior, interior, patio and even up the trunks of palm trees are bejewelled with millions of molluscs’ former homes.

Visitors over the decades have came equipped with their donations which makes it strikingly international for such a small and unassuming Andalusian village with a population of around 5000.

You can enter the house for the grand sum of 1 euro!

The shells aren’t just placed randomly either as I probably would have done it. They are so artfully placed to create an elegant, unobtrusive design for the rest of the properties in the area.

Overall tones of creams, beiges, browns and reds make for an attractive and not at all tacky unique decor for a slightly hidden house on a cobbled street in a widely unknown village!

When it was time for lunch I really was ready for quite a big meal as it was quite cold and we had walked a fair distance by this point.

Pre-Christmas, with loads of events lined up including a trip home to my city of Liverpool, I was hoping to keep other costs low this month.

Well, I needn’t have worried as a great lunch of shared tapas and media raciones including Córdoba’s native flamenquin and salmorejo along with other Spanish favourites such as huevos rotos and croquetas along with a glass of wine and even a slice of chocolate cake came to just 5 euros. I actually laughed when the bill arrived!

Add to this the setting of a terrace positioned just on the edge of the hills on a street lined with orange trees heavy with their December harvests; their scent drifting along the street as the warm afternoon sun began to shine out, taking the edge off the winter chill. 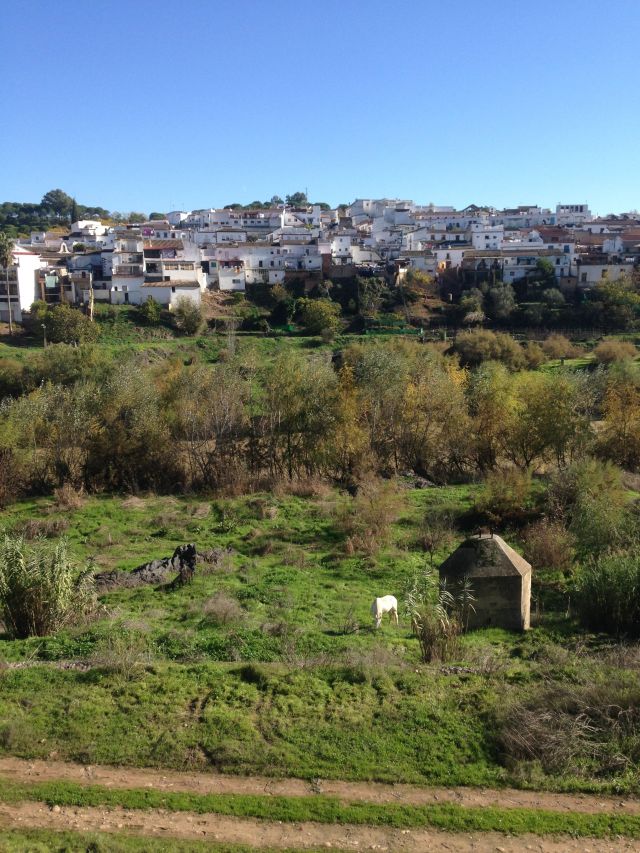 How to get there from Córdoba?

The best way is via car if you have access to one.

Take the A-4 motorway and pass Las Palmeras and merge on to the E-5. Take exit 359 towards Montoro/Bujalance/N-420/Ciudad Real and 5 minutes later you’re there.

Spanish Glossary for this Article

Croquetas– fried croquettes which usually have a bechamel filling with chicken, or jamon or tuna

Are there any particular Spanish villages you love?

Is there another pueblo of Córdoba that you’d like to know more about?

Leave your comments below, I’d love to hear from you.

💠 𝔾𝕝𝕒𝕤𝕤 ℂ𝕖𝕚𝕝𝕚𝕟𝕘𝕤 💠
Anyone interested in language learning, I’ve written a blog entry tracking where I’m up to with learning #italian so far after approx 8-10 months and the methods I’ve tried and tested. I’ve really written this for my own use to update it every few months so I can see what my progress is like but if you are interested in this sort of thing, the link is in my bio ☺️🇮🇹
𝑳𝒖𝒄𝒊𝒅 𝑫𝒓𝒆𝒂𝒎𝒔𝒄𝒂𝒑𝒆𝒔 𝒊𝒏𝒔𝒑𝒊𝒓𝒂𝒕𝒊𝒐𝒏𝒔: 𝑳𝒚𝒌𝒌𝒆 𝑳𝒊 🇸🇪
꧁Lucid Dreamscapes inspirations: Björk꧂: 🦢 @bjork
🍊☀️𝔸𝕡𝕖𝕣𝕠𝕝 𝕊𝕦𝕞𝕞𝕖𝕣 ☀️🍊 {swipe for poem}
Me & G 🐶
Love this picture by @rebeccakennywrites of my little Lucid Dreamscapes in its natural habitat by the sea at Southport sand dunes some weeks ago ☀️🌾.
🌷Happy World Poetry Day! 🌷Today I received my author copy of ‘the flower shop on the corner’, a lovely nature poetry anthology created by @redpenguinbooks_ @jksnotkidding @jklarkinart . Thank you for featuring two of my poems! Looking forward to reading the rest of the collection 🌷🌸🌺🌼🌻💐🌹🪴🌿
¡Traducción del inglés al español en curso! 🌊 #paisajesdesueñoslúcidos 🌊